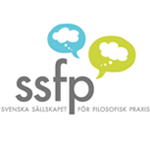 During the last few decades something has happened to the role of philosophy in society. Philosophy is finding its way back from having become reserved for academic discourses, to once again be part of everyday happenings — just like things used to be in different times and cultures, in the ancient Greece and ancient China.

For more information about the Swedish Society for Philosophical Practice Click Here.

The Society for Philosophy in Practice represents the English-speaking community of philosophical practitioners, particularly but not exclusively in the UK. For more information Click Here.